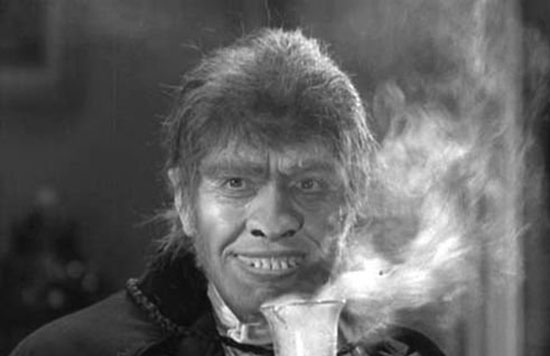 When it comes to the horror genre, victims—and even heroes, for that matter—are a dime a dozen. Who can remember everyone Jason has killed throughout the Friday the 13th series or how Michael got his comeuppance in, say, Halloween 4? Sure, everyone knows that Van Helsing has defeated the most famous vampire of all in countless versions of the story, but how many recall who dispatched the monster at the end of House of Frankenstein? Who were the people that Godzilla stomped? Who was it that exterminated the giant ants in Them? Did anyone manage to escape the House of 1000 Corpses? It’s hard to remember!

But the villains—oh those amazing villains!—will live on for all of eternity in horror cinema… 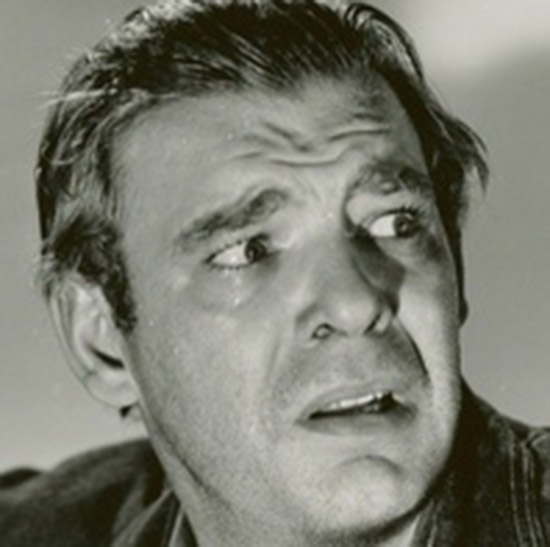 During the Golden Age of Horror, Universal Studios was the undisputed king of horror cinema, and its Big Three monsters—Dracula, Frankenstein’s monster, and the Wolf Man—remain definitive horror icons nearly a century later. Not coincidentally, the three actors most associated with those iconic Universal monsters—Bela Lugosi, Boris Karloff, and Lon Chaney, Jr., respectively—also remain the biggest names in classic horror decades upon decades after their final films.

Of those Big Three horror legends, though, Karloff and Lugosi have always enjoyed slightly elevated standing over Lon Chaney, Jr., who—despite a truly prolific career—has always been considered somewhat of a little brother among the Big Three… 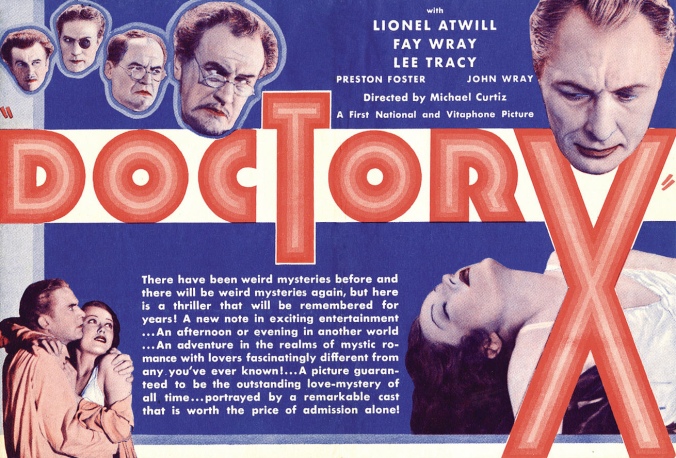 Mad scientists occupy a special place of honor in the pantheon of horror.

Sometimes misguided, sometimes megalomaniacs, sometimes simply evil for the sake of evil: mad scientists come in all shapes and sizes and have rivaled vampires, zombies, and giant monsters as the primary threat to cinematic civilizations for more than a century. The fear and mistrust inspired by horror cinema’s rich tradition of reckless experiments, out-of-control technology, and scientists determine to rule the world still impact our culture and politics today.

Henry Frankenstein (or Victor, if you’re a purist) may be the most famous: inspired to create life from dead tissue, he animated a creature so foul and monstrous that even he came to realize that it must be destroyed. But Frankenstein hardly stands alone. From Doctor Jekyll to Doctor Heiter: horror fans know all the names and all the schemes.

Which is why it was such a delight to stumble across Doctor X.

Released in 1932, Doctor X upped the ante on the still-young mad scientist subgenre by offering up five—count ‘em, five!—mad doctors for our viewing pleasure.

When New York City finds itself terrorized by a series of gruesome murders perpetrated under the pale light of the full moon, five colleagues at a prestigious medical research academy come under suspicion. It seems that the “Moon Killer” uses a special scalpel in his crimes that can only be found at that particular facility, meaning that one of the five researchers must be the fiend. Unfortunately, finding the actual killer proves to be a difficult task, as the five of them collectively tick off every transgressive box one can imagine: intellectual arrogance, delusions of grandeur, sexual perversion, fixation on the sinister power of moonlight, and even fascination with cannibalism. (Three of them—count ‘em, three!—have potentially cannibalistic tendencies, which must be a record for prestigious medical research academies.)

Given 48 hours by the police to root out the killer among them, Doctor Xavier—the head of the academy—whisks the sinister bunch off to his spooky, beach-side mansion. There, he intends to conduct an ethically-questionable psychological experiment: a re-enactment of the Moon Killer’s crimes designed to reveal guilty party.

There is other business to attend to, of course—Doctor Xavier’s beautiful daughter (a pre-King Kong Fay Wray), the meddling reporter (Lee Tracy), and the alternatively creepy (George Rosener) and comical (Leila Bennett) household staff—but for most of the film the focus remains locked exactly where it should be: on the five suspicious scientists and the race against time to unmask the Moon Killer.

Based on the movie’s title, it might appear that the mystery would be a particularly easy one to solve, but one of the most compelling things about this film is its ability to maintain suspense and to conceal the Moon Killer’s identity right up to the big reveal. Each of the five mad scientists stands alone as an interesting, compelling character, and their individual rivalries and quarrels ratchet up the tension and provide the conflict that keeps the plot moving forward. It is to the credit of the actors—first and foremost Lionel Atwill as Doctor X himself—that none of these characters comes off as stock or shallow.

Today, Atwill’s horror resume’ stands on its own, but at the time of Doctor X, he was still years away from his signature performances in films like Mark of the Vampire, Captain Blood, Son of Frankenstein, and as Professor Moriarty in Sherlock Holmes and the Secret Weapon. Here he headlines an outstanding cast that features Preston Foster, John Wray, Harry Beresford, and Arthur Edmund Carewe as the rest of the motley band of potential killers.

What really makes Doctor X an effective horror film, however, is the unflinchingly jagged edge of the material. Produced before aggressive implementation of the infamous Motion Picture Production Code, Doctor X deals openly with themes like cannibalism, rape, and brutal murder, themes that would soon be subject to censorship under the Code.

At the same time, the production design and direction (Michael Curtiz helmed this one) give full visual expression to the risque’ material. Shot in early Technicolor, the film’s awkward hues, urgent close-ups, and menacing set design fuel the film’s ability to maintain a sense of dread that drives it through a highly entertaining 76 minutes.