Each day during October, Madison Film Guy will post a new mini-review/recommendation/musing on a contemporary or classic horror film to help celebrate my 31 favorite days of the year: the countdown to Halloween! Today’s film: 1985’s Re-Animator. 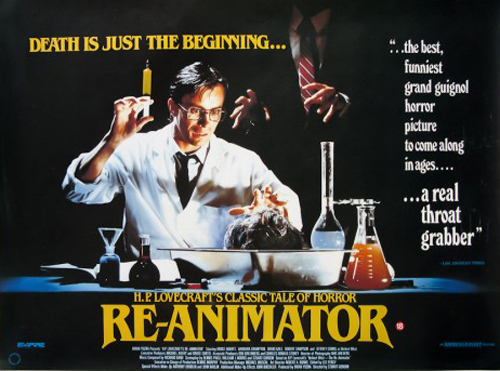 In 1999, I met Stuart Gordon at a screening of one of his films on campus at the University of Wisconsin – Madison. After the movie, I waited around to introduce myself, asked if I could interview him sometime, and Gordon graciously gave me his card and told me to call him. I should note at this point that I was not working as a journalist and had nowhere to publish the interview, but that’s beside the point. When I called his production office a couple of days later, I got his answering machine, left a message, and assumed I’d never hear back from him.

To my surprise, Gordon did call me back, and we scheduled an interview a week later.

That week, I plowed through all ten of his movies as research for the interview. One evening, as I was re-watching his first film, Re-Animator, my phone rang, and it was Gordon. He was personally calling to reschedule the interview, which we did. After we hung up, though, I marveled at the fact that I had just received a call from minor legend in the horror field WHILE I was watching his iconic, ground-breaking film. I assumed—correctly—that that would never happen again. But it remains one of my favorite stories to this day.

The film itself, Re-Animator, also remains one of my favorites, not just in the horror genre but on my all-time list.

Re-Animator, a loose adaptation of an H.P. Lovecraft short story, is the tale of Herbert West, an arrogant young medical student who develops a reagent that can re-animate dead tissue. However, when West decides to experiment on human corpses and injects his reagent into various medical school cadavers, he discovers that they are far less enthusiastic about his experiment than he is.

When Re-Animator opened in 1985, critics did not seem to know how to react. The venerable Janet Maslin warned that the film should “be avoided by anyone not in the mood for a major blood bath.” A more generous Roger Ebert wrote of his fellow Chicagoan’s film that Re-Animator is “a frankly gory horror movie that finds a rhythm and a style that make it work in a cockeyed, offbeat sort of way.” And Pauline Kael effused that it was a “horror-genre parody [at] the top of its class.”

Today, the film endures as a true horror classic. Suspense. Scares. Sex and gore. The film opens with a gothic nod to traditional horror and then immediately flashes its Grand Guignol street cred and wicked sense of humor. It takes hold of you and never lets go.

So, thanks, Stuart Gordon, for all the memories.