In 1996, the movie Scream famously articulated the “rules” you needed to follow in order to survive a horror movie of that era. Nearly 20 years later, I would humbly revise those rules with some suggestions as to how today’s teens might avoid finding themselves trapped in a horror movie altogether.

Ironic, actually, that rule # 3 should include the word “horrible”, because as it turns out, each and every one of my three rules are broken in the horrible new found-footage horror flick called The Gallows.

Found-footage horror films have existed for years, long before they were made famous by The Blair Witch Project, the success of which was less about pioneering a new subgenre and more about its ingenious marketing effort. Since The Blair Witch Project, however, the found-footage approach has too often been not a creative choice, but rather an excuse for poor production values, bad acting, and lack of vision.

To be sure, there have been some top-notch found-footage films in recent years. Barry Levinson’s The Bay was interesting if not all that scary. Norway’s Trollhunter was creative, thrilling, and fun. And the anthology V/H/S hit hard and fast and was legitimately terrifying.

But for every V/H/S, there have been a dozen films like the promising but dreadful The Houses that October Built, The Amityville Haunting, and The Frankenstein Theory. (Bluntly, if The Frankenstein Theory had actually been an honest-to-goodness documentary, and at the end of the documentary you would actually see actual, verifiable footage of a REAL-LIFE, man-made monster walking the earth…this movie would still be all but impossible to sit through.)

Actually, make that a baker’s dozen and add The Gallows to the ledger on the dreadful side.

At the start of The Gallows, we see home video footage of a school production of a play called “The Gallows” (that’s the name of the movie!), shot from the back of a typical high school auditorium. In hushed whispers, a mom and dad talk over the action and roadmap out the proceedings for us: complimenting the fine construction work on the set’s gallows and obliquely referring to some mysterious “last minute change” that can only foreshadow disaster. (If you put these two on an airport runaway with a couple of flashlights, their pinpoint guidance would keep all the planes running on time, no doubt.) Of course, disaster does strike, and after little Charlie slips the gallows’ noose around his neck, something goes wrong and little Charlie dies. Turns out the construction work on the gallows was not quite as good as they thought…or maybe just a bit too good?

Fast-forward 20 years, and a new crop of theater students is in the final day of rehearsals for a revival of “The Gallows”. Due to a remarkable collision of convenient antics, longings, and lazy plot devices, four of them wind up locked in the school at the witching hour, and before long, the sinister, ghostly Hangman starts to stalk them. 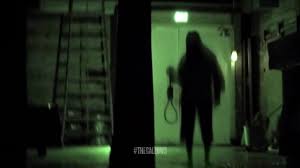 The Gallows manages to conjure up one or two brief—very brief—unsettling images. And it manages to construct a few—very few—jolts and moments of suspense. But for a movie that clocks in at an economical 81 minutes, it is somewhat shocking how much time drags on at the beginning of this movie before anything interesting (and that’s a relative term here) happens. Despite featuring twice the number of writers and directors here as usual—Travis Cuff and Chris Lofing share both duties—The Gallows delivers less than half the scares. And that’s being generous.

In the end, the victims of the Hangman turned out to be the lucky ones: they didn’t have to stick around all the way to the end of The Gallows.