I’m not a musician. I don’t play an instrument, don’t read music, and can’t really carry a tune. I don’t pretend to understand music theory or philosophy. But I do know how music gets under my skin, touches me, and powerfully affects me in ways that nothing else does.

And I know that the creative force behind some of the songs that do just that is Brian Wilson.

Unlike traditional musician biopics, Love & Mercy—released in 2014 but distributed widely just this summer—does not attempt to chronicle Wilson’s entire life and career, but rather focuses on two relatively narrowly-defined periods of Wilson’s life: the 1960’s and the 1980’s. In the earlier period, Wilson was producing the Beach Boys’ masterwork album, Pet Sounds, and beginning to struggle with the serious mental illness that eventually derailed his career and his life. In the later period, Wilson was falling in love with his second wife and would-be-savior—Melinda Ledbetter—while psychologically imprisoned and controlled by shady psychotherapist Eugene Landy.

Love & Mercy alternates back and forth between the two periods in Wilson’s life, with Paul Dano portraying the younger, faltering Wilson, and John Cusack filling the role of the older, broken Wilson. The unconventional approach—two different adult actors playing the same character at different points of his life—works in unexpected and riveting ways. After two decades of struggle with debilitating mental illness, drug abuse, and family turmoil, the fragile, dependent Wilson of the 1980’s indeed seems to have been a completely different man than the energetic, dynamic Wilson of the Pet Sounds era. Dano and Cusack famously did not coordinate their takes on Wilson and barely even met before or during the film’s production, and as a result their individual portrayals of the man are crafted and shaded in their own unique ways. And both shine. 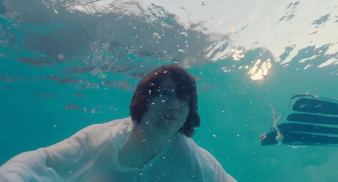 The always-reliable Dano disappears into his role, imbuing it with the same bursts of intensity and nuance that brought him critical acclaim in Little Miss Sunshine and There Will be Blood. Dano illuminates the screen as young Wilson, bringing a manic joy to the scenes in-studio as Wilson feels his way through Pet Sounds, and equal parts vulnerability and independence in the one-on-one emotional encounters with his father. In one early scene, Dano’s Wilson sits at a piano and plinks through his new composition God Only Knows—a song that Paul McCartney would later call his favorite song of all time—for his father, whom the Beach Boys had already fired as their manager. Desperate for his father’s approval but resolute in the rightness of his musical vision, Dano sets the table for the parallel relationship that Wilson would struggle with in later years with Landy.

It is Cusack, however, who is a bit of a revelation here, eschewing the easy charm that has defined the bulk of his career and hollowing out his character to its raw, desperate core. It’s not that Cusack outperforms Dano, per se, but rather that we see a performance from Cusack unlike any in his career so far. It is personal, powerful, and delivers a handful of heart-breaking moments that linger well beyond the closing credits. When Cusack’s Wilson meets Ledbetter and slips her a handwritten note that says simply “Lonely, Scared, Frightened,” it is a disarming and painful cry for help that Cusack spends the rest of the film echoing.

Like Cusack, Elizabeth Banks surprises as Cadillac-saleswoman-turned-guardian-angel Melinda Ledbetter. When she comes across Wilson in her showroom, she circles him warily, unsure what to make of the emotionally reclusive teddy bear that he appears to be. Banks especially shines in her scenes with Paul Giamatti’s Landy, whose relationship with Wilson—by all accounts—was somewhat more complex than the one sketched out by the movie, but who here fills the role of villain with relish. At first, Banks’ Ledbetter defers to Landy. Later, she probingly challenges him. Finally, determined to break his hold on Wilson, she goes fully to battle with Landy and fills the screen with her strength and determination. Love & Mercy’s odd release schedule will likely do it no favors come awards season, but even in an acting showcase such as this, Banks’ performance stands apart and may be the one most likely to gain recognition down the road. If nothing else, it elevates Banks to a new level as a leading dramatic actress.

In a film that splits its main role between two actors, though, it seems only fitting that a third Brian Wilson—the real Brian Wilson—be introduced in the film’s closing moments. As the credits role, we see Brian Wilson himself in close up, at a piano, delivering a concert performance of his song Love and Mercy. The delicate, gentle strains of the song from the man himself offer a comforting, redemptive punctuation to the film. Brian Wilson still struggles, still hears the voices in his head, and still wrestles with the demons of his life.

But Brian has his music. He has Melinda. And he has survived.