Each day during October, Madison Film Guy will post a new mini-review/recommendation/musing on a contemporary or classic horror film to help celebrate my 31 favorite days of the year: the countdown to Halloween! Today’s topic: The Appointment in Sammara. 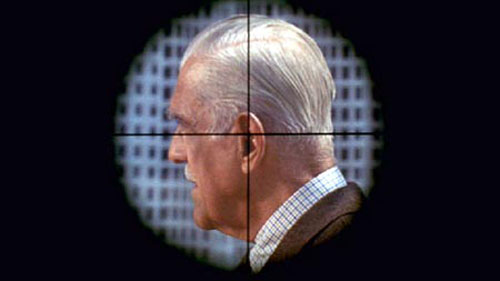 The Appointment in Sammara (from Targets, 1968)

First off, in the interest of full disclosure, I’m not a fan of Peter Bogdanovich’s 1968 directorial debut, Targets.  It’s the story of an elderly horror film star–making a personal appearance at a drive-in theater–who gets tangled up with a boy-next-store brand of mass-murdering sniper. It’s uneven, largely uninteresting, and it hasn’t aged well.

However, it does star Boris Karloff as the aging film legend, and he’s terrific, no more so than in this classic scene in which he relates to a group of young fans the story of “The Appointment in Sammara”.

Here is one of Karloff’s finest final scenes of a distinguished horror career: